Photo credit: Breakfast of Champions by arvindgrover on Flickr. 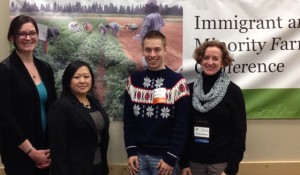 The 9th Annual Immigrant and Minority Farmers conference was held on February 1-2 in St. Paul, MN, with attendees from Minnesota, Wisconsin and Ohio. The number of registrants totaled 160 on Saturday and 137 on Sunday, of which 60 percent were immigrant and minority farmers, and the remainder being sponsors, exhibitors, presenters, interpreters and volunteers. The entire conference was simultaneously interpreted into Hmong, Spanish, Bhutanese, Nepalese and Karen.

Farmers’ Legal Action Group has been a core member of the planning committee for this conference for the past eight years. This year, FLAG Senior Staff Attorney Hli Xyooj served on the planning committee, and FLAG staff took active roles during the two-day event. Susan Stokes, Executive Director, was emcee on Sunday and presented a workshop on resources for immigrant farmers. Hli Xyooj conducted a workshop focused on basic recordkeeping for farmers, facilitated lively lunch panels for all attendees on both days, and led an open space networking session for Hmong American farmers. Jennifer Kalyuzhny, Equal Justice Works Fellow and Staff Attorney, presented a workshop about licensing. Eric Sannerud, Communications Associate, volunteered at the event.

FLAG extends sincere thanks to everyone who worked together to make this year’s conference a success for the farmers and sponsors alike, with special thanks to Joci Tilsen for her leadership, organizational wizardry, and passionate commitment ensuring that the Immigrant and Minority Farmers conference continues to improve and be a tremendous resource for the farmers she has served for many years.

Farmers' Legal Action Group is a nonprofit law center dedicated to providing legal services and support to family farmers and their communities in order to help keep family farmers on the land.