Photo credit: Breakfast of Champions by arvindgrover on Flickr.

St. Paul, Minn. – Farmers’ Legal Action Group (FLAG) was honored at the 2013 Minnesota Nonprofit Mission and Excellence Awards event, sponsored by MAP for Nonprofits and the Minnesota Council of Nonprofits (MCN), as part of the MCN’s annual conference in Duluth on October 25. 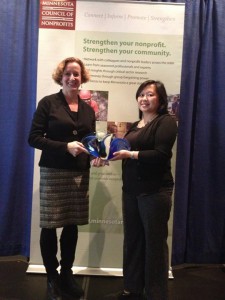 FLAG, a nonprofit law center based in St. Paul since 1986, will receive the 2013 Anti-Racism Initiative Award for advocacy work with Minnesota’s community of Hmong American farmers who face discrimination and barriers that exclude them from economic opportunities and keep them isolated from the wider Minnesota community. FLAG’s advocacy approach on behalf of Hmong American farmers combines FLAG’s legal skills, experience with community lawyering, and alternative dispute resolution bringing people and communities together, rather than dividing them.

Some of the work FLAG is being honored for took place last summer when more than 30 immigrant and refugee farm families contacted FLAG after they learned of a new restrictive zoning ordinance that threatened their livelihoods raising vegetables in Washington County for sale at the region’s farmers’ markets.

As a result of FLAG’s advocacy, the township repealed the ordinance and has engaged in an ongoing, two-way dialogue with the immigrant farmers.

“The people of FLAG have been working for 27 years to protect the rights and the livelihoods of family farmers, and this recognition from the Minnesota Council of Nonprofits means a lot to us,” said FLAG Executive Director Susan Stokes.

This is the third time in the last year that FLAG has been honored for its work with immigrant and refugee farmers. Last spring, FLAG’s Hmong Community Outreach Coordinator and Staff Attorney Hli Xyooj was among a handful of honorees when The Saint Paul Foundation recognized five anti-racism advocates. Xyooj received an Honorary Mention Award for “Demonstrated Leadership in Creating a Racially Equitable Community.” Last fall, the Minnesota Justice Foundation (MJF) honored FLAG Executive Director Susan Stokes with its Direct Legal Service Award for her work on behalf of low-income farmers.

Stokes added: “We’re deeply honored to have the importance of this work recognized. Our goal is to bring together farmers, neighbors, and government officials to work for a food system that is fair and just to everyone—especially the farmers who grow the bounty of healthy food we all enjoy. We all do better when family farmers do better.”

Farmers' Legal Action Group is a nonprofit law center dedicated to providing legal services and support to family farmers and their communities in order to help keep family farmers on the land.